You never have to do anything, but you always have to live the consequences

Bit of a tough week this one. Mostly because I've forked out some money for a video game that has been slowly killing me in all sorts of ways.

So it was actually pretty painful to scrape together enough photos for this week. I did take more than seven, but the quality of them sucked. But considering the rule here is it doesn't matter how much they suck, here they are. I had to cheat a little and put in some from other weeks, but here they are nonetheless. 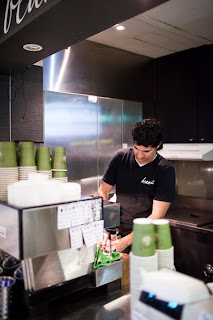 This is Quan. He makes excellent coffee. It's one of the few places around my workplace that sell Campos. I've mentioned previously that I'm a big fan of it, but don't particularly remember why I started drinking it in the first place. I really wish I knew somewhere I could sit down and have a cup of the stuff during my lunch break, but I'm yet to discover anywhere close by.

There are little details that go into making coffee. Quan has a little block of wood that I think he brought in that sits next to the coffee machine. Why? Because after foaming the milk he needs to tap the base of the jug on a surface to settle it. Not such a pleasant thing to do against a stainless steel benchtop, so he brought his own. 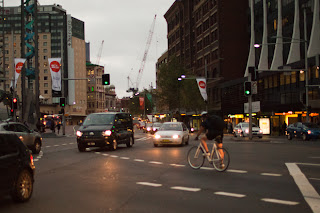 If it's not immediately apparent what's up in this picture, it's one of my pet peeves. The cyclist in the middle of the intersection is stationary in this photo. I think cycling is a great form of transport. However, more and more I'm seeing jerks that complain that they're not given their fair share of the road (and I agree), but at the same time refuse to abide by simple traffic laws like obeying traffic lights.

I don't have a problem with cyclists who ride on the footpath at a jogging pace. I do have a problem with cyclists who ride straight through red lights and through pedestrians trying to cross the road. Are you cycling on the road? Then obey the road rules. One of these days I'm going to lose it and kick someone off their bike. It'll probably be an unwarranted for just a single idiot, but the number of people that don't obey the rules seems to be becoming the majority. 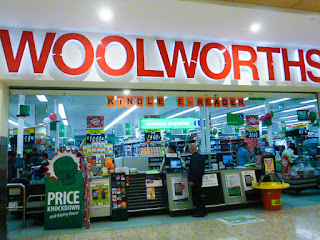 Woolworths (or Safeway depending where you live) was apparently selling Kindles. I have no idea why. I rarely ever shop at Woolworths since there are practically none where I live, so the idea of selling consumer electronics is quite strange to me.

I would have thought we'd see iPods in Woolies before Kindles. 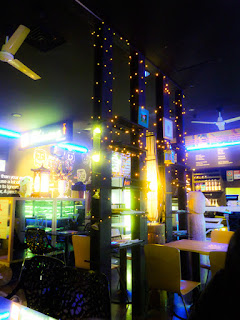 Over on Pitt Street, near Goulburn, is a little known restaurant/lounge called Shinara. Upstairs they have an all-you-can-eat buffet, Korean style, but downstairs the lounge is rarely populated. A couple of friends and I ended up having dessert here the other night and it's a strangely mature place. Mature? Well, usually we end up at cafes and such where there are a lot of loud uni students or it's on a busy street with lots of people coming and going. I think we might have been the noisy lot, and we're not even that loud.

I'd probably give the buffet a miss next time, but for somewhere quiet to have a chat on an evening, the lounge is a pretty nice place. 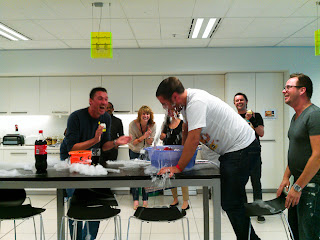 Friday morning tea at work involved bobbing for apples. I somehow found myself nominated, but escaped at the last moment. Probably a good thing as the last time I played some food-related game I ended up catching a tooth on a piece of string, cutting up my gums and not being able to eat without my mouth hurting for about two weeks. Good times. Will do business again. AA++++.

Watching people bob for apples, on the other hand, is a barrel of laughs. Really, it should be called "dunk your head in a bucket of water", because that's essentially what we're here to see. Given my reluctance to do it though, I have to give it up to my coworkers. While I'm a bit of a chicken for not doing it, really, what's the worst that can happen? You're expecting others to have a laugh anyway. Are you worried they're going to laugh? Sometimes logic evades me. 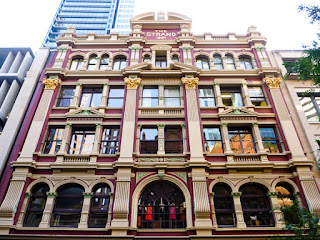 I've heard a story about a class of students that were shown video footage of buildings from the first floor upwards, without given the location. When asked where they thought the buildings were, they could never figure it out. It makes sense though. How many times do we ever look up at buildings in Sydney? We've got a huge number of old facades, beautiful buildings, but we never stop to appreciate them. This one should be pretty obvious, but can you picture where you'd have to be standing to see it from here?

I'm in Pitt Street mall again, looking up at The Strand building (obvious from the words on it). Most people get distracted by the old hallway that joins up with George Street with all the shops in it. It's actually a really pretty building from the outside and quite well kept. 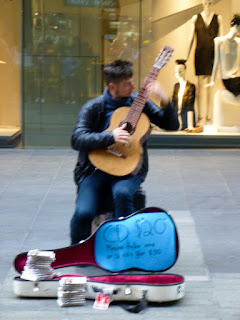 Also on Pitt Street mall, another busker. I find it amusing that this guy is probably making more money from each CD he sells than signed bands do when their publisher sells an album. Sure, he might not have the same volume of sales, but making lots of money isn't always the aim of everyone.

I sometimes wonder if I'd rather do something I love every so often and earn a rich return on it, or to turn what I love into work and let everyone along the way take a cut. I might still be working for myself, but I'm also working to pay everyone else at the same time. Makes you wonder how many entrepreneurs are out there who think they are working for themselves, but are really working for a different definition of the man.

I think it's more clearly explained by the story of a multi-millionaire who had houses in several countries and housekeepers in each one. In the end, he ended up feeling like the was working to ensure that his housekeepers were paid. I guess our busker here is really living in his own house and paying himself.
Posted by M at 9:39 PM