If you never understand yourself, it is rarely reasonable to expect others to

It's been a pretty fun week. In between losing sleep over video games and forgetting to go the gym, I went to a themed ball, hung out at an old biker cafe, ate more Japanese food, went boxing for the first time, and got punished by my temporary trainer immediately after.
Still, it feels like a lot more could have been done with my time. 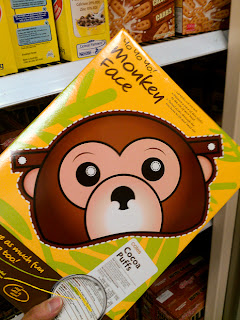 The regular shopping trip always yields weird and interesting things in the oddest places. Surfing down the cereal aisle (and yes, I still use the trolley as a scooter/toboggan when I think no one is looking), I saw this peering out from a dark shelf.

I'm all for getting the maximum use out of cardboard and all that ... 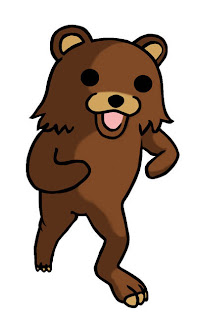 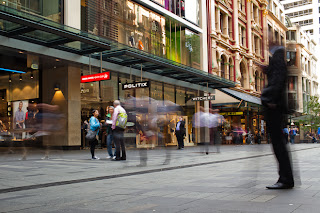 Hanging out in Pitt Street mall again while waiting for my gym partner. You see a lot of different people walking through here all day, most oblivious of others' existence. It's a slightly comforting thought when you're wandering around taking photos, but it's also a rather strange thought. You can walk through one of the most populated areas in Sydney and no one will really know you're there. 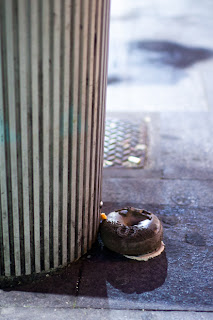 Goulburn and Pitt, on the World Square side. I've seen this concrete doughnut for weeks now, but keep getting really blurry pictures on my phone. Having tried several times now, I think I'm pretty much used to people looking at me weirdly as I squat and try to take pictures. The funny thing is, once they notice what I'm taking a photo of, it's all perfectly acceptable behaviour.

It sort of reminds me of when we dressed one of my friends up for his bucks and went to town. It's pretty amazing what you can get away with, so long as there's a relatively reasonable explanation. Hey, it's okay, I'm the official number taker tonight. 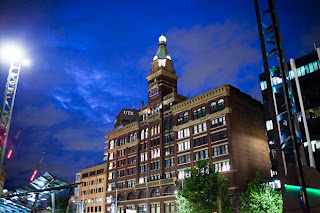 I'd forgotten there's a TAFE just across from Railway Square for some reason. Sneaky buggers. There's been one pretty much close to everywhere I've ever lived. I don't know if that's to do with coincidence or whether they just have a seriously huge number of campuses.

I studied at the Ultimo campus part time one semester doing mechanical engineering. Given I was studying electrical engineering at uni at the time and all my coursework had become something along the lines of solving hideously complex (and boring) equations, I was stoked to be able to do things like learn to weld. A couple of hours a week at welding might just have a bit more utility to me today than calculating equations that can now be plugged into simulators. 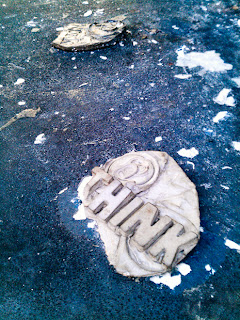 Still at it, although not with much change, here's another street sculpture at Liverpool and Pitt, on one of the monorail pillars. I think almost all of them have a sculpture of sorts. The original creator of these is Will Coles. I'm not sure if he's the same guy fixing them to everything, but it's slightly strange to be following someone around by the things he leaves behind.

I stumbled across his site years ago, but lost the link until recently. They say Sydney doesn't have much art, but it's there if you know where to look.

Speaking of which, Sculpture by the Sea is currently on. I'd be more interested to see if anyone has tried to sneak their own work in again as Will has done in the past. I wonder who would have known the difference? 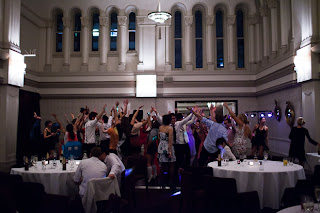 Upstairs in the Queen Victoria Building, we take a very old building and make it our own private dance floor. I bet they didn't see us coming when they named it the Tea Room. I don't think I even had a single cup of tea. False advertising, that one, unless they consider alcohol to be tea. A perfectly acceptable substitute. 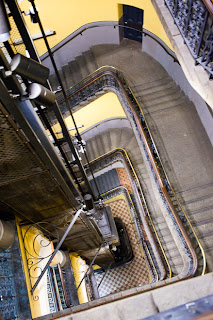 I have recurring dreams of travelling on old elevators like this one, also in the Queen Victoria Building. Most of the time I'm a coal mine kid, trying to get out of the mine shaft. Other times I'm a suit and tie, a confident exterior, but really just completely lost. Half of the time I die. Now that I think of it, I've never been in an old elevator. I don't think it's a good time to start.

I don't seem to have many dreams where I die. Another is whenever I am driving or am a passenger of an R32 Nissan Skyline. I always, without exception, die. Usually in a horrific accident, but sometimes the car will just randomly explode. I've never sat in one for that reason and will refuse to drive one, even though I think they are a fantastic vehicle from what I've seen and heard. 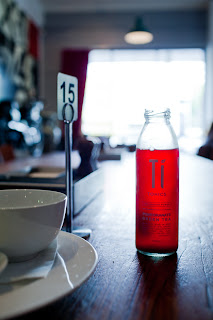 Coffee on a lazy Sunday afternoon, one of my friends bought this pomegranate and green tea tonic, which was the strangest, glowing shade of red. Although we were at Deus Ex Cafe, I was more fascinated with this drink than the bike in the cafe. I mean, this red thing looked like it was comic book radioactive or something.

On the other hand, it was fun to actually visit the cafe for once. I'd passed it so many times, often on my motorcycle, but never stopped in. I would have thought there would be a lot more motorcyclists like at the various other places I used to hang out at when riding, but there weren't. In fact, there were a couple of senior citizens and families. 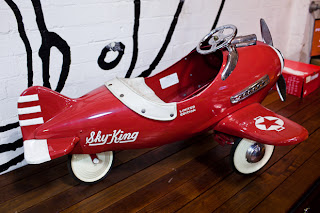 Out in the demo room, I spotted this little gem. I really wonder who decides to go ahead and make these things.

I had my eye on an old bike, a Honda CB 750 that had been restored and fairly heavily modified. My last bike was fairly old and only made over a period of two years. It was a constant battle to keep her maintained since she'd been pretty badly abused over the years. Though she's gone now, I really do miss being on two wheels and getting grease under my fingernails.

I also seem to have lost the ability to count to seven. Never mind.
Posted by M at 12:22 AM