"I love you, but ..." is the easiest way to tell if love is conditional

After shooting all of last weekend, my SLR is getting a bit of a rest. One of the things I do is ensure that I have multiple backups of all the photos I take. At the moment, this means all my compact flash cards are sitting at work just in case my house burns down and my multiple sets of local copies are destroyed. I'm paranoid about these things.
So this week is entirely from my phone and more opportunistic than with any sense of thought. 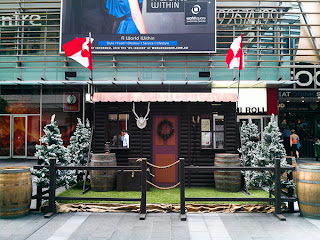 Christmas is coming up and it seems like the beginning of November is fair game for decorations. I don't really understand what's up with the Canadian flags though.

It's slightly amusing to me because this is near my work place. My old work place used to be near the Canadian consulate and last week I ended up listening to talks that in part related to the Canadian government in an event near that work place. 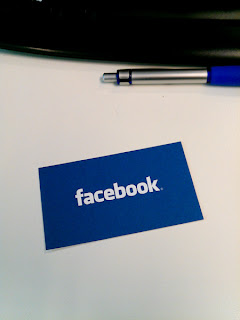 One of the interesting things about being a journalist is that you get to meet a lot of different people. As someone who was once such a social recluse that he hated the very idea of even purchasing train tickets from an attendant as opposed to a machine, it's an interesting space to be in once you realise that for some reason people are more scared of you than you are of them.

I think a business card speaks volumes about the sort of company that you work for. Whether they're embossed, gloss, matte, textured, or unique in some way they all say something. Probably what leaves an impression on me the most though, is the weight of the paper stock. I was actually surprised that Facebook's cards weren't printed on something heavier. In contrast, a public relations person I'd been talking to earlier that day had some pretty nice cards.

I often check with people whether they understand Eastern traditions in giving and receiving cards by simply doing it and seeing if they follow. I don't expect many people to do the whole giving and receiving with two hands and studying the cards, but I'm often surprised by who does and doesn't know how to, or who simply flick their cards across the table! I'm sure everyone keeps a "dirt" file on me anyway. Those damn journalists! 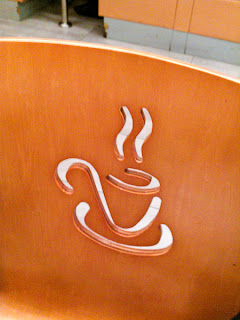 I have a few friends that live in Ashfield and I often end up eating around the area. While one of my favourites are two dumpling stores of Liverpool Road -- New Shanghai and Shanghai Night -- there's a cafe a little further down the road that I visited for the first time this week. I thought their chairs were cute.

It's one of the few cafes I've seen with a separate indoors, but partitioned off, smoking area. Usually you see that sort of thing at a pub. They're a bit pricey, but the servings, at least for dessert, seem pretty generous. I couldn't finish mine. Homers Cafe, 339 Liverpool Rd. 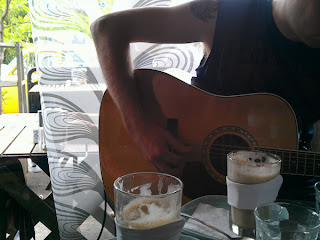 I also made the trek out west where we had lunch at a little place in Glenbrook called the Jazz Apple Kitchen. My significant other's sister's interest often plays the guitar there. While I only met him for the first time that weekend, it's interesting the things you pick up, or possibly imagine that you pick up, from conversations.

When I was following him in the car, I spent a while wondering what it was about his driving that seemed familiar. I realised a little later that the lines he drove, even though we were both driving quite slowly, reminded me of those I've seen many, many other motorcyclists take when I used to ride myself. Now I don't know whether I imagined it or if it was because he mentioned earlier that he too used to ride. 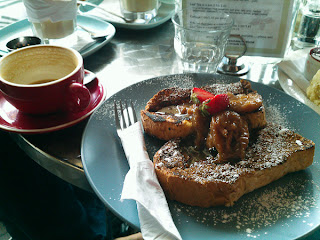 French toast and caramelised bananas. I'm a sucker for bananas. Make them into thickshakes, bake them into banana bread, deep fry them, add some icecream and call it a banana split, or make a banana sandwich; it's probably one of my favourite fruits. I was devastated when the price rose to over $14 per kilogram and cafes and restaurants in Sydney began to charge ridiculous surcharges.

Call me crazy, but if you've never tried it, take a thin slice of tasty cheese and eat it with your banana. Cheese and banana. It works. 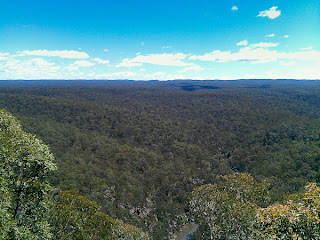 Looking out from Bluff Reserve, Glenbrook, south-west towards Jellybean Pool. I actually had no idea where I was when I took this picture, but I'd been to Jellybean Pool many years ago when I used to go hiking semi-regularly. Back then, as a scrappy little kid, I'd fall into creeks and rivers all the time.

My days of exploring canyons and peeing off cliffs have since been replaced with the urban landscape where I still explore laneways and unfortunately find where others have been drunkenly peeing. There are less spiders at least, though. 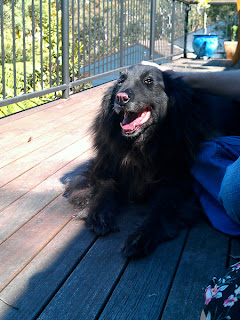 This is Belle, a Belgian Shepherd. She's quite old and has a few medical issues, but like my German Shepherd Dog is a sweet old sook. She's how I imagine Jess may grow up into one day. Jess is still mostly bouncing off the walls still though.
Posted by M at 12:21 AM