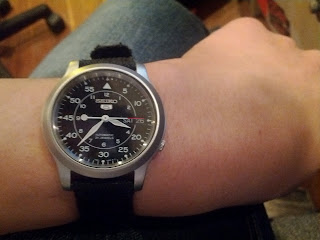 I've been sick the past few days with what seems like the flu. I'm sort of like a cat when I get sick. I just get a little quieter than usual and don't really show any outward signs, but the way I recover is more like a dog. I burrow away for a while then emerge a few days later all fine.

This typically means roasting myself into a horrid sweat for hours. Its worked pretty well for as long as
I can remember, but it also ruins my mental state. I end up having crazy thoughts and dreams and I lose all track of time. So though I had broken sleep for about 12 hours the other night while trying to recover, it felt like I lost a day or two. Unfortunately part of that was dreaming about going to work, so it felt like I went to work for another day.

Anyway, the watch. My dreams got me thinking about who I am and what I do. Yet again. The truth is, as much as I am passionate about journalism and writing, it's not something I see myself doing for the rest of my life. So in my sickness I realised time is ticking away from me and I've settled into a state of adequacy. Everything is adequate for my needs, but really, I'll never achieve the form of greatness that I want.

To be honest, I want to go into business, create jobs, but feed profits back into a community, and solve a problem. I want to live a life that gives back more than is possible through a single person. And I feel that every day I don't is another day wasted. So worse than being sick is getting better and realising that you're wasting your life's potential.

Still, my life isn't a complete waste of time. I know that what I currently do does bring benefit to others' lives, but it's on a much smaller scale than I would have hoped. I'm no superhero, but I feel like what many of them claim to feel like before they find their purpose. That there's something bigger, something greater, that they're meant to do in life, but they just don't know what it is. The problem is, life is not a movie, and there's no guarantee I'll ever find out what it is.

The watch? It's my new favourite toy, my first automatic. Doesn't keep time as well as a quartz movement, but I like how it's purely mechanical. Sometimes I'm old-fashioned that way. You'd think me different, a lover of technology, but some things just don't feel the same for some reason. Razors with a gazillion blades? What happened to a straight edge shave? Cars that park themselves? What happened to becoming a better driver? Sometimes it feels like advancements in technology just make us dumber. 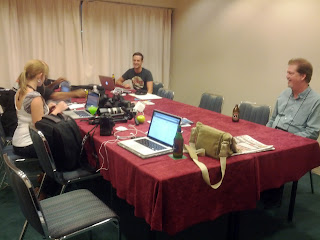 From the Gold Coast earlier this year. Sipping on a beer in the media room. It was a security conference and the year before, a journalist was arrested by Qld Police. Nothing of similar event happened this time around, although I secretly had hoped something would. Is it mean to hope for excitement? I think it's just biting off more than you can chew. Or perhaps a sign that you're tired of life. 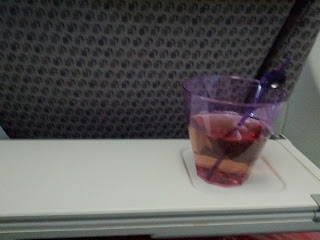 VA isn't bad. It's not fantastic either. I've racked up enough frequent flier miles in order to get to a pretty high status level with Star Alliance. The problem is, I'm a cheap ass and these days rarely ever fly on a Star Alliance carrier, so having status doesn't really matter.

We flew Sydney to Hong Kong to London. Took a train out from London to Shropshire to Birmingham to Shropshire and back to London again. Then flew London to Nagoya to the Gold Coast and back to Sydney again. That's our first holiday in about six years and it only lasted two weeks. I have personal photos, but client work I need to see through before that.

I'd like to go to the US for a holiday some day. I've been to the US about three or four times now, but only on transit. That's life just teasing me. 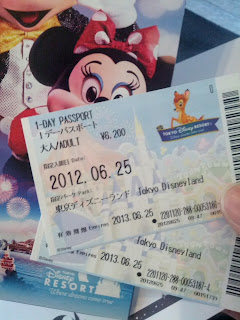 And while I was in Tokyo, I figured it was time to visit Disneyland for the first time. I'm not getting any younger.

It's funny I say that. I've refused to admit I'm getting old for a while now. When I was in university, others would say it and I'd simply not believe them. I guess it is a relative thing. Now I look back at people in university and they seem like such young folk. I'm guessing my peers think the same of me.

But physically, I'm starting to feel it. I used to work two jobs and still attend university as a full-time student. These days I can barely manage my other job on the side in addition to my full-time one.
Posted by M at 1:09 PM