If you had amnesia, would you still be friends with those around you? 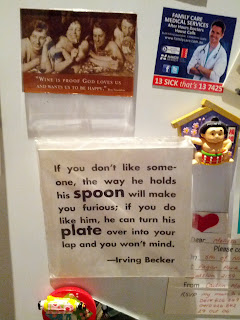 This sits on my sister's fridge. I've lost count of the number of years its been there, but I remember identifying with it quite strongly when I first read it. I'm also part way through reading Eckhart Tolle's A New Earth which elaborates on the idea of ego and our perceptions of the world.

Perhaps where we see this the most is when we hear of friends that break up with their significant others. If it's a bad break, then in a mere few months, their perception of their significant other goes from one extreme to the other. The thing is, I don't think people change dramatically. I believe it takes quite a lot for someone's personality to completely change overnight, a literal life-changing matter. So what does it mean?

If someone turns around in a short space and suddenly claims that someone is despicable within a very short period of time, it's less likely that the person they're talking about has changed, but more that the perception of them has.

And on the flip side, sometimes people can change dramatically, over a period of time, but our old perceptions of them can trick us into not seeing them for who they really are.

The problem with knowing this, is that sometimes you realise that you don't actually like certain people that you think you do, and that you logically might like others that you currently find to be despicable.

And then to further complicate things, what if you're someone that is frequently misunderstood? 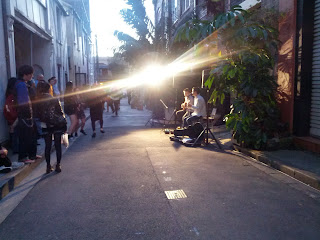 Busking is one of those things that for a long time I've said I would want to do, but don't have the courage to. I'd liken it to public speaking -- it will probably make you a better person when you do it, but having to do it scares most people.

As part of my day job, I record a weekly podcast. To me, that was just like busking. It sounds like an fun thing to do, but terrifies the crap out of me. The past few weeks, however, are probably the first that I've ever felt relatively relaxed. I guess the only way I can describe it is that it's not that I don't care, but I am without care, if that makes any sense. 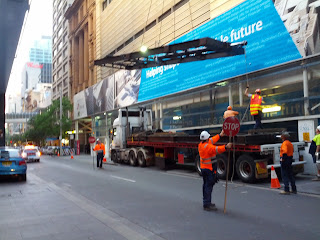 I actually walked past this without noticing what was going on, and admittedly this is a pretty poor photograph of what is happening. There's a crane lowering this down from several stories above. No idea what it is, but maybe it's a crane.

And speaking of cranes, ever wonder how they make them? They use another crane. No kidding. I remember being told this as a little engineer in training while on the job and thinking it was a joke. 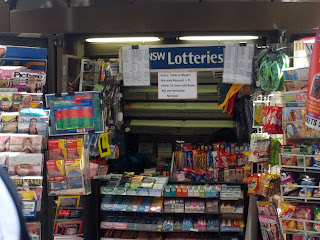 Across from Town Hall, it's probably not legible but the sign in the middle reads "Sorry, Tobacco Buyer! We may Request I. D. Under 25 years old Buyer. We are Seriously Nervous." 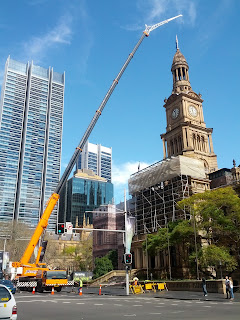 I remember taking this photo and thinking it's the first time having an odd-sized aspect ratio on a smart phone is actually relatively useful. 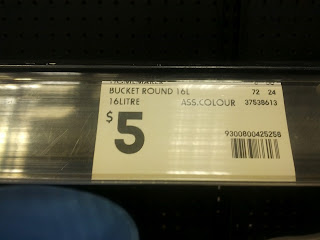 Do you know how expensive it is to buy a bucket? It's ridiculous. But anyway, I bought a cheapy one partially for the fact that it was ass coloured. 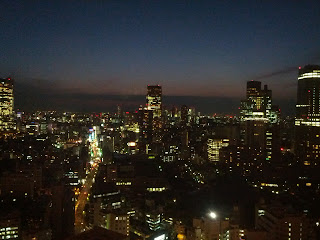 I miss Tokyo. But then again, I've barely travelled, so that might be a reason why. What I worry about is that if I go back, it will be like Melbourne. Melbourne? Yes, Melbourne.

In 2006, I went to Melbourne for a holiday. I've been there several times, but always for work, which limits what I could see. I had a ball of a time, ate everything in sight, and have several memories from that trip that are among my most cherished.

A few years after that, I went again. I had a rare spot of extra time after going there for business and thought it would be great to wander around town again. However, I'd seen most everything I wanted to see already. I guess I'm an exploratory sort of guy, and well, Melbourne is not that big, so it was a bit disappointing.

Just like revisiting children's cartoons when you're nearing your thirties can almost ruin your prior memories, I feel like I have an irrational fear of upsetting the great time I recently had.

But then, that's just like me to confuse my perception of things with how they actually are, isn't it? Sometimes, even though you know reality might be different, it feels better to live the lie.
Posted by M at 6:42 PM