Alright, it's another week with a few experiments in street. I guess it could be argued that most things here are street since most of the time I wander around Sydney's streets taking photos, but I don't see it that way.

The greatest take away from all of this? I'm still here alive and breathing. Taking pictures on the street will not kill you. 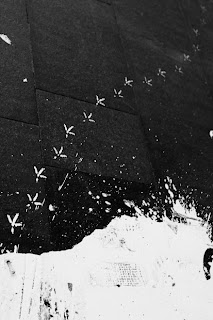 I have no idea what caused this paint spill at Railway Square, but it was pretty fun to watch the stories that came out of it. Was it a trolley? There were tracks coming out of it. But the paint trail went on for several hundred metres down Regent.

It was mostly cleaned up the next day, but not before I spotted this little track of footprints. Dirty bird. 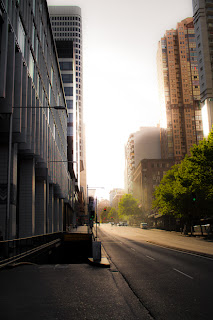 I actually took this to experiment with in some new processing software I was going to try. I still haven't gotten around to doing so. Last week was my turn to come into work early, so I've been getting all this lovely light, but not having enough time to watch for things to shoot.

A fairly recognisable intersection, Goulburn and George. What is with this crossing? You can't turn right no matter which way you approach it. I've often wondered how much of Sydney's traffic is just people driving around trying to figure out how to get on to a certain street. 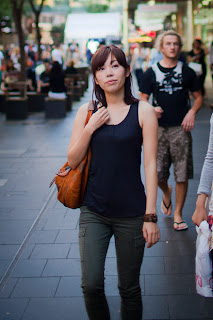 I'm wondering what she's thinking. Not many people actually look up as they're walking. It's pretty sad actually. We're rushing through the city, staring at the back of the person in front of us, or down at our smartphone, which is meant to make us more connected. 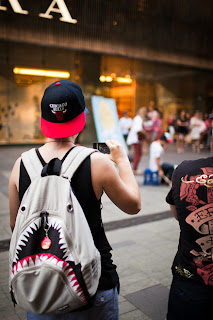 I liked the variety this guy had. While I've seen that bag around a few times, I haven't seen any Chicago Bulls merchandise since high school. Rarer than that, it just hides his blue-dyed rat's tail -- something I used to have when I was a wee little kid and never seem to see any more. I guess it's like the mullet. There are only so many people that can pull it off. Like MacGuyver.

And back to his bag, what's that it's eating? An Angry Birds keyring. Awesome. 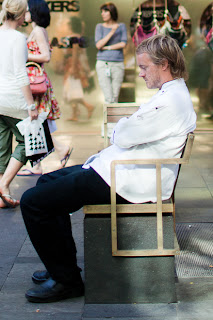 This guy was enjoying a peaceful moment, nodding off for a nap while surrounded by shoppers. No one really gives you a second thought. I'm beginning to wonder how much you can get away with in Pitt Street mall. 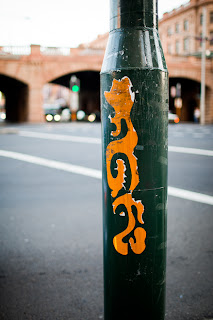 Eddy and Pitt. I wonder who spent the time to do this. More importantly, what the heck is it? It sort of looks like an alien with a huge exorcist head stepping on a baby. Or taking a dump, getting freaked out and running away. I'm sure that's exactly what they had in mind. 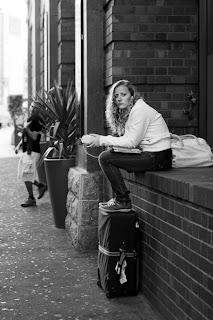 This was one of those awkward moments where I saw a shot, lined it up, and the subject turned and looked directly at me. I shot it anyway and kept on walking. I actually thought the original shot would have turned out nicer. I guess it shows what happens when you're just that touch too slow.

The building she's sitting at is Wake Up!, a hostel/cafe on George and Pitt. It seems like a pretty nice place to stay if you were travelling and I've considered stopping in just to have a beer and a bite. Maybe next time.
Posted by M at 12:22 AM