Genuine apologies make certain they never have to occur again

I pretty much wrote this week off after several evenings out kept me from my work. That and I've still been playing too many video games. I have a feeling it's going to be like this until next year as Christmas rolls in.

Speaking of which, I'd better find some presents for people. 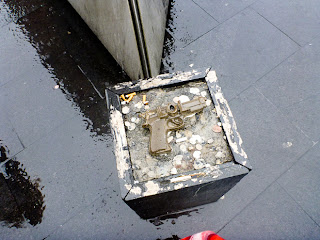 Guns on our streets. Lol. Does it fire lulz? How would you reload a lulz gun?

I actually considered joining a shooting club as something that would be out of the ordinary, but I have enough expensive hobbies as it is. A gun that could fill people with laughter would be infinitely more useful. 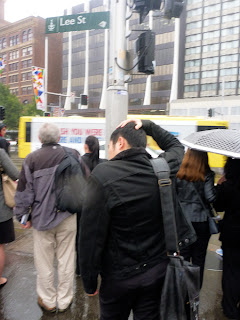 What about all this rain? It seems I wasn't the only one caught out without an umbrella this week. I'd like to some day take my DSLR out in the rain and shoot street. You see, most people aren't going to stop you when it's pouring and they're trying to get out of the rain. And there's some quite odd things to see.

Take this fellow for example. I have no idea how this works, but he'd been doing it for a while, wandering around, not in any sort of rush, with his hand on his head. I haven't been minding the rain too much for this reason. There's always a lot of interesting things to see. 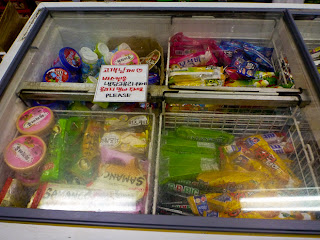 I ended up in Lidcombe this week and one of the places I stopped in at was a Korean grocery store. Why? Ice cream. I don't understand any of it except the English written "please", but I assume it's asking me not to leave the freezer open. Or eat all of their ice cream. Or take photos or something.

I'm sure I've mentioned this before, but I love Korean ice cream. I'm not a huge fan of Melona, the green ones in this pic, but I like the "e-Chocolate Bars" in the blue packaging. Apparently it stands for enriched chocolate ice cream bar. I'd tell you where this shop was, only I have no idea where I was at the time. 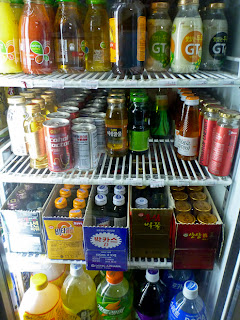 A close near-second are Asian drinks. Who else would sell "Alcohol Doctor" hangover tea? Or a Power of Energy drink? I have no idea what else is in this fridge. I ended up getting something that looked like a half-can of orange-flavoured something-or-other.

I figured it'd be like Fanta, but when I opened it it wasn't carbonated and instead contained orange pulp and sweet orange juice. I bet one day I'll buy a coffee based on the picture of coffee beans on it, but instead find it is actually just full of coffee beans. 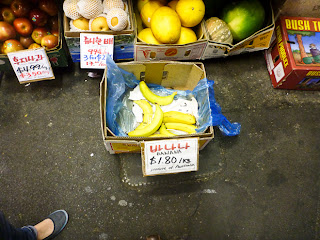 Remember my infatuation with bananas? I'd been waiting for them to come down in price and refusing to buy them any sooner than what I thought was fair. The only problem is, I've gone so long without them and feel so spiteful towards Coles and Woolies/Safeway for jacking up the prices (and I believe they went up way before and after stock would have been affected/been restored) that I haven't been buying many. 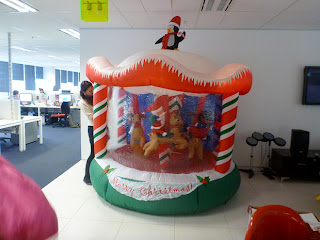 I have been a lot less festive this year. Normally we have our lights up around November and the tree shortly after. In fact, our lights have been up for the past two years, just never switched on. Well, they don't seem to be working correctly this year and we're still debating where we'd put the tree. We currently have a giant cat tree in our living room for our cat, where our Christmas tree usually goes.

But in a way, I don't feel so bad when we have this Christmas carousel at work. This thing actually moves. I spent a little while trying to figure out if it was at all possible to get inside and dance amongst the reindeer, but it doesn't seem possible. I've taken to prancing around outside of it when I think no one is looking. 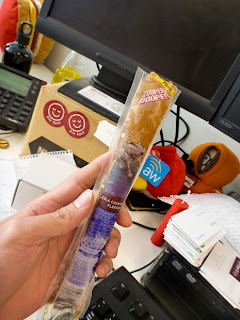 I haven't had a Zooper Dooper in years. When I was in the first grade or so, my primary school used to have tokens that kids were given for good behaviour. These could then be exchanged at the school canteen for a Zooper Dooper. The first time I ever got one I was super excited (excited is something I generally don't appear to be these days, at least outwardly) and ran to the canteen during recess.

I was clutching it in my hand as I ran across the playground as fast as I could with the other kids who had one, but when it came my turn to give up my token, it suddenly wasn't in my hand anymore.

I never did find out what happened to it, or forget the moment of panic I felt when I realised I'd lost something important to me. After seeing me lost for words and on the verge of bursting into tears, the canteen lady spoke for me. "Did you lose your token, dear?" The only thing I could do was nod while still looking around, wondering how it could have impossibly disappeared.

She handed me a Zooper Dooper after snipping the top off with a pair of scissors and reassured me it was okay before sending me on my way. I still don't recall the taste of it, but I've always remembered the mix of emotions at the time. It was probably my first lesson in life of significant (to me at the time) material loss, but more importantly, that sometimes people will give you the benefit of the doubt, even when they're within their full right not to.
Posted by M at 1:39 AM No comments:

Sometimes the biggest problem is admitting you have a problem

Lots of things to take pics of this week, with work Christmas parties happening. Unfortunately, I failed to remember to take pics. Then again, it was probably a good thing I didn't take any after seeing some that have been floating around the office. I'm not sure if I'm not in many because I managed to dodge the camera, or if others are saving me from embarrassment.

I've also been healing up all week from a toe infection of sorts in preparation for a 20km day walk. A couple of those pics made it through this week. 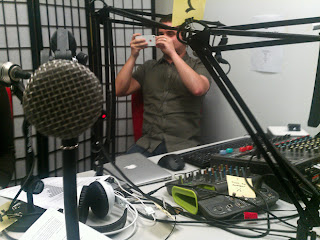 In the office, we're starting up our podcast again, but it's turned into a more relaxed chat about whatever might come up rather than a more structured (and stale) program. For me, unstructured-ness is a great thing. I tend to not like it much as I generally go wherever, which is a bit of a blessing and a curse as a writer since I'm forever trying to figure out where I'm going with something, but in the meantime coming up with all sorts of new thoughts.

I also have developed a horrible habit of over formalising things after working as a consultant in so many corporate environments. I try to take things a little less seriously these days, but bad habits are hard to break. 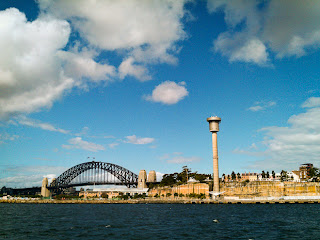 Out on Sydney harbour on Friday on a boat. Nice boat.

I've always wanted to get my boat licence, not just because it'd be fun to float around (probably in a tin can), but because I could be Captain Michael of Sydney! I'd so flaunt that. Excuse me? Michael? That's Captain Michael to you.

One of the people I was talking to on the boat that had their licence said that one of the first things the licence guide tells you is that boats and alcohol don't mix. "I don't know what they're talking about. Boats and alcohol are one of the best combinations known to man!" 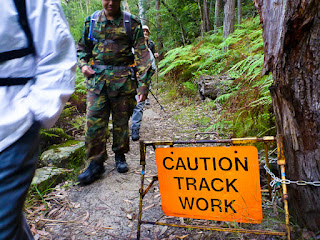 I went hiking from around Berowra to Mt Kuringai over the weekend. It's like Cityrail's screw ups manage to follow you around, even when there are no train tracks and only walking tracks.

I did find it slightly amusing that they chained the sign down. You'd have to be pretty dedicated to want to hike back out of the bush carrying that.

We saw a lot of things. I walked over a brown snake, which thankfully decided to slink away and not kill me, a red belly, a few bush turkeys, a random rooster (I really have no idea what the hell it was doing and I when I heard it crow I thought I was going mad), a few goannas, a crapload of spiders, and a kangaroo.

Oh and leeches. Blood sucking bastards. I had one in my shoe.

But worse than leeches are probably ticks. Those suckers just don't let go like leeches do. 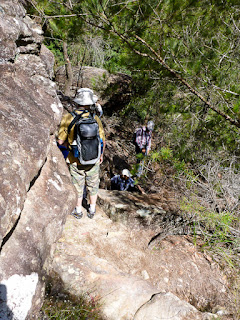 I'd been eager to find out how much going to the gym had improved my endurance and overall fitness, if at all. Unfortunately, I've been fighting a toe infection of sorts and had not been going in order to rest it up and let it heal in time for the hike. Going on a walk after practically not doing anything made my body pretty upset.

The funny thing is, after about 20 minutes or so, it gives up and just accepts its fate. I think I did a lot better than I would have a year ago. 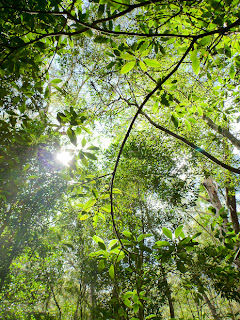 While hiking is great for fitness, it's not the main reason I do it. I think a lot during these hikes -- when you're walking for so many hours, it's natural to do so. But hiking is a very symbolic thing to me. There's no guarantee that you're going to finish and it's a constant struggle to take the next step. It's the same with life.

Where do you find the motivation to take another step, to make further progress? Sometimes you don't. You just tell yourself to shut up and do it. All the ways you tackle it can be applied to life in general, it's just that you get to live a microcosm of it for perhaps one day.

Did you miss the scenery? Are you walking down the right path? Are you putting in all this effort, only to have to turn around later? Are you falling behind, or getting to far ahead? Who's going to help you if or when you fall down?

It's the greatest analogy to me, and even at the end of it, after it's all done and finished with, if I look back and don't have fond memories or a sense of achievement, it makes me question whether I set the bar high enough. 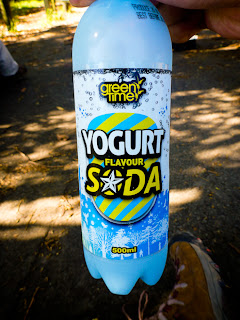 What do you drink when you finish a walk? Soghurt. Or is it Yoda? It doesn't matter, because it's green time!

Seriously, I have no idea where this is from, but it pretty much tastes like what you might imagine yoghurt would be if it were a soda. Sort of like creaming soda actually. But just, not. 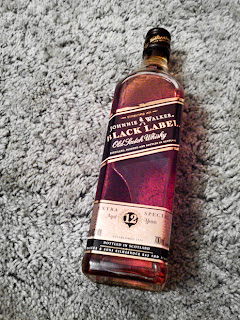 But lastly, as if I wasn't tired enough, a bottle of JW will do the trick. Oddly enough, although I previously stated that only JD gets me depressed, I found myself extremely sooky and woke up the next morning to strange posts on one of my social networks which, admittedly at the time, I remember seemed like a good idea, but was horribly cryptic and fairly pointless.

I often get a laugh out of cryptic messages on Facebook and the like. The sort where people post about how they are having a horrible time or something similar and when someone asks, they say they don't want to talk about it. But in reality, I've realised that many people do the same, putting up little passive-aggressive tantrums to let people know they're upset, but not wanting to discuss it.

You don't even need to be tipsy for that, but I'm guilty nonetheless.
Posted by M at 10:39 PM No comments: