I've taken to sitting around in the State Library more recently, which is where I think I wrote my last Seven up, but I keep finding I'm using the time for other things I just haven't done yet and need to catch up on.

I think this should probably rank a little higher though. 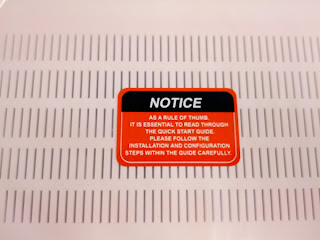 After so many years, my router finally carked it, rolled over and, well, sort of died. It decided, quite randomly, that it didn't want to maintain sync for all that long and kept booting me offline. Me being me, I instantly suspected that someone was doing something odd. Perhaps trying to boot one of my other computers off the wireless to steal the handshake.

No, it's just what happens to crappy hardware when it's left on for several years at time. So I got around to getting a new one after being rather unamused at the random jerry-rigging of old hardware I had been using to maintain a decent sync speed and keep my wireless secure. 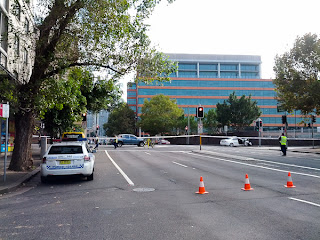 I set out from home one morning all bleary-eyed and asleep (actually, that's me most mornings, but anyway) and I'd wandered a far way when I realised that the normally loud and busy roadway next to me was completely empty. During peak hour. On a week day. I instantly decided I'd died and had woken up in some alternate universe.

It turns out there was an accident some time in the early hours of the morning and while forensics teams were looking at the scene, they had shut off most of railway square and the roads nearby, so there was barely any traffic.

I heard it was a ute that hit a taxi and the taxi driver had died. Either way, everything felt rather strange, but that could also be because I don't really wake up completely until later. 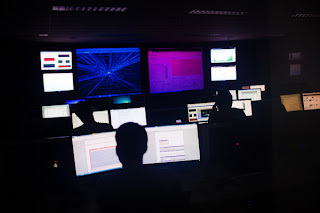 If I had a setup like this, I'd have a live kitten feed on one of the monitors. I get to see some of the strangest things during my day job. It's supposed to be a cyber security centre, but in the back of my mind all I could wonder was how awesome a LAN party could be in a place like that. Not that I've had a LAN party in a while.

In fact, I haven't heard even my geekiest friends talk about having one in such a long while. Doesn't anyone do them any more? 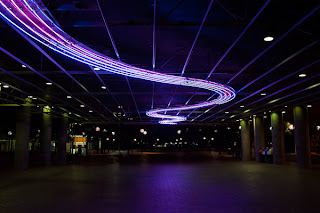 Probably about 5 to 6am in the morning down in Darling Harbour before the Google+ Photowalk. I have a couple of my pics from the day up on Google+. Now you get to see how bad I fail when I try a little harder.

Probably the strangest thing about the walk was that I'm not a landscapes person. I shoot people most of the time. But taking photos of photographers is not exactly normal. 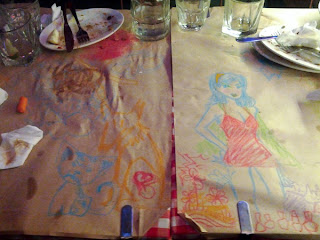 I don't remember the name of this place. I think it's called Mad Pizza or something similar? It's next to the Mad Mex out near Oxford St. Awesome food. What's more fun is that they leave you crayons to draw on the paper tabletops. I can't draw to save my life, but just about everyone else I was eating with could.

My friend, the one that got caught in the kid's playground netting from a week or two ago, decided the first thing he would do is draw a giant penis on my table. Joy. 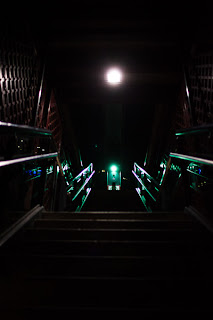 Another discarded pic from the Google+ Photowalk. More recently I ran up these after going on a Nike Sydney run. Big mistake after having already run several kms. I think I near fell right over at the top and I'm sure I looked like a fool at the time. Nevermind, it's all in the name of getting fit!

It's something that's been taking up quite a bit of my time actually. Strangely, I've been off heavy weights and long runs for the past week or so just due to random outings and things, but I've also felt horribly depressed. I'm not one to usually talk about these things if I can help it, but I thought it was rather coincidental that the two happened at the same time. They say exercise raises your mental state and you can get addicted to the high (source: broscience ;P), so perhaps that's what's happening.

Either way I want to get back to the gym and beat the crap out of a bag. 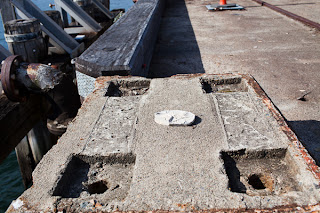 On Cockatoo island I spied this. It's probably a bit hard to tell, but it's one of those concrete sculptures! Even on an island, hey? It's funny how these things just turn up when you're not looking for them, but you know about them. Like when you decide you like a particular model car and suddenly it feels like they're everywhere.

Perhaps the same could be said for how we see people. Perhaps if the pessimistic me could see that people are willing to go that extra mile, I'd better appreciate others' efforts.
Posted by M at 7:10 PM