Okay, it's been a while, but thankfully it's not because I haven't been taking photos. I've got a whole backlog of them again, but I'm having trouble putting some words to go along with them.

Go figure, a picture tells a thousand words, but I feel the need to add some more to them. Does it mean the photo doesn't speak for itself? Possibly. 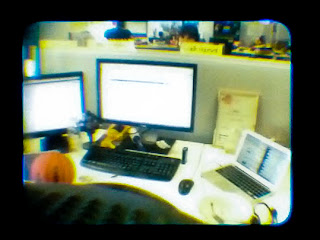 So one of the cool things about working where I do is that I sometimes get to gawk at the new products my coworkers get to review. However, this particular picture is from the viewfinder of some brand-spanking-new camera.

You see that black blob in the bottom left? That's the lens body. I don't know how you mess that sort of thing up, but I guess it can be done. 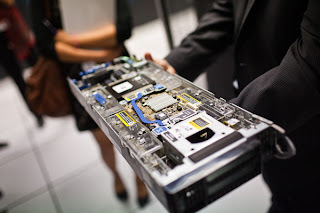 I also take my camera along with me to whatever events I go to. The photos I take don't always end up being newsworthy though, so I sometimes end up with a bunch of photos I save up anything else that's related, if I ever use them again.

This is of a server. The guy showing us around wandered up to a server rack, yanked it out and took the top off it. 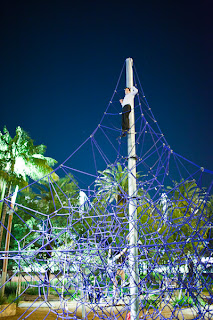 Darling Quarter has turned into something pretty impressive, but what has one of my friends wondering is how this structure doesn't end up killing kids. I'm guessing that if they fall the netting is sufficiently spaced out so that with each "bounce" they're slow enough that the chance of serious injury is limited.

Or I could be completely wrong and maybe there'll be a dead kid on the news some day. I know I used to climb on the outside of these sort of things when I was a kid... and teenager. And adult. If you can call me that. 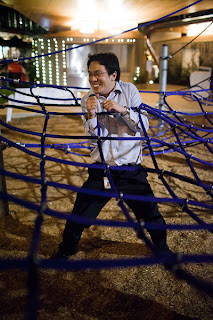 You see what I mean? There's a kid in all of us. 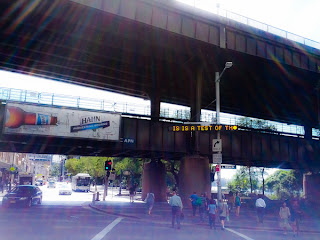 I've never actually seen our city's emergency warning system work before. I had thought that the test would have involved an audio test, but I didn't hear one. Perhaps I missed it. But if the point of these tests is to allegedly prepare office workers for what to expect, I don't think it's working. 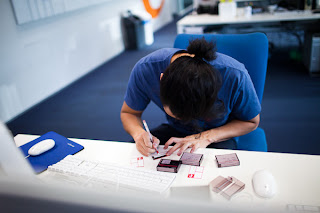 One of the video guys at work, with me just spying from the other side of my cubicle wall, if you can call it a cubicle. I'm not sure if I want the world to see my face yet. I'm the sort of person that has a lot of thoughts in his head, but has trouble organising them on the fly. It's probably why I used to write a lot -- it's a lot easier to splurge things out into a word processor and then arrange all my ideas around them.

I suppose that's what the video guys end up doing -- giving the information some structure and making it easy and understandable to watch. If you get me to do that, I usually end up getting stuck on what I should say first and end up not saying anything at all. 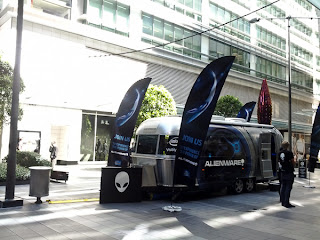 I spotted this on my lunch break. I was hoping to get a snap of the green "alien" that was wandering around, but alas, they must have returned to their home planet. They were essentially someone dressed head-to-toe in bright green polyester.

So that's Seven, and I'm sure you're wondering where the rest are. The truth is, I get a bit bummed out and overwhelmed with the thought of writing after writing all day. It's not that I don't enjoy sharing my stories, it's just that plonking myself on the couch or reading Reddit all evening is highly satisfying after a long day at work.

So I'll rather than leave you guys completely hanging on some weeks, I'll try and queue up something. I know you guys are still visiting (and I'm surprised, to be honest!) even in the weeks I don't post, so hopefully you'll have something more interesting to see from now on.
Posted by M at 12:44 PM