When faced with a question of ethics, the harder choice is often the right one 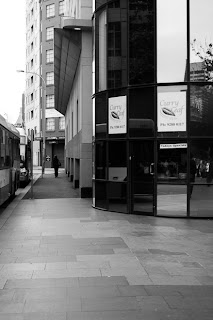 This is just to the side of the Mercure, near Railway Square. It's not really an alleyway, but so much tends to happen down here. In the morning, sometimes there will be a Chinese or Japanese tour bus. Other times smokers from the hotel, taking a moment to fill their lungs. After a rough night, it's necessary to watch your step. That's not spilt coffee or water on the ground there. And there's a hole in the wall where many times I've wandered past couples looking for some privacy before their bus or train leaves. Every street has a story.

Surprisingly, the DSLR got some time out this week. I've been shooting with it and a point and shoot despite having my camera phone on me all the time. I've been leaving it at home more recently as it's difficult to carry along with my gym gear on most days. 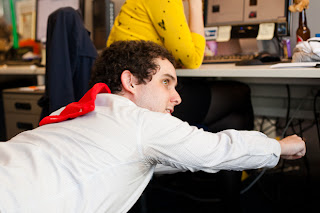 Remember what I said about complete randomness last week? We had a stuffed Dodo toy which had a little cape on it. While I thought it would be funny to put in on a coworker, he ran with it and planked on a chair. 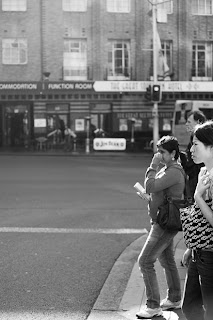 Still experimenting here. A crutch I'm currently using is to stand near a street corner while waiting for the lights to change and shoot into the intersection. I could probably be shooting at people and they couldn't care less, but I still don't think I'm there yet. 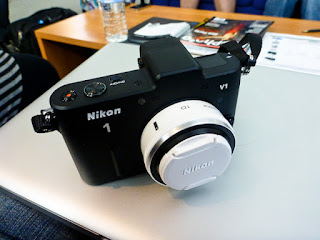 I met with my mentor this week and he happened to have with him the new Nikon V1, which was announced the other day. It's a pretty sweet camera for a mirrorless system, but it also has a viewfinder. Without making this into a review, the screen on the back of that thing is extremely clear. Don't think I've ever seen anything quite like it. 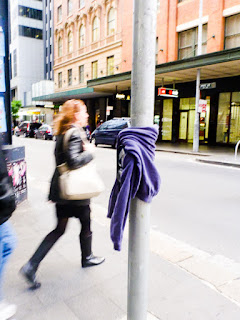 Good Samaritan or someone playing silly buggers? I've often wondered what happens to clothing that is lost, then placed in prominent places for anyone that might realise and come back. I passed a very neatly (and possibly washed) jumper on the side of the street the other day. You have to admire the fact that whoever does this has no idea whether it will be found or appreciated, and they know they'll never be thanked for it. 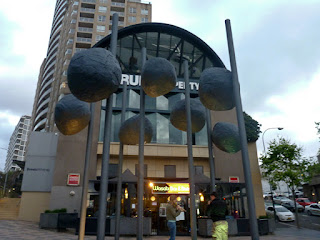 I don't come out to the cross very often, but a group of friends decided to eat at Wasabi Bistro. It's at 1 Kings Cross Rd. The last time I came here it was another sort of Asian restaurant, so it was slightly weird. The food was pretty good though.

For some unknown reason, the artwork out the front really annoys me. I don't know what it is. Maybe the cluttered-ness of it, or the way that the "balls" are off-centre. Perhaps because it's likely that they aren't as heavy as they look. Actually, they don't look heavy either. 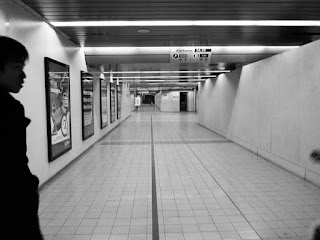 I somehow ended up on the other side of Central this week. I rarely ever come through this side and combined with all the construction work occurring, I barely recognised it. It reminds me in a way that things and people that are so close by can be there for so long, that you forget about them. Then after a slow, gradual change, things can become so different that it's like seeing something or someone new.
Posted by M at 7:00 PM