Would you rather try and die or die having not tried? 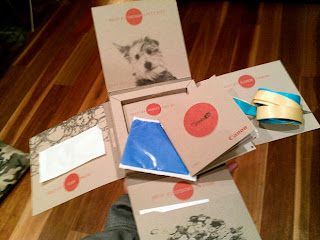 Got this in the mail early on in the week. It's Canon's Photo5 box. The idea is that you have five briefs, four of which have objects. You're meant to take a photo incorporating the object somehow. This year's objects are foam bubbles, powder, sequins and a ribbon. I'm pretty horrid at actually sticking on theme. Last year one of the objects was incense. I ended up burning my box. Needless to say, I didn't win. 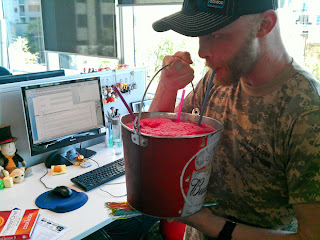 Fellow work colleague. 7-11 was apparently having a deal where you bring in your own cup, so he decided to bring in the largest bucket he could find. I was sitting around late that evening trying to finish off some writing when I heard him disposing of what was left and moaning "My tummy is sloshing around and it's cold to the touch!" I never know what's going to happen next. 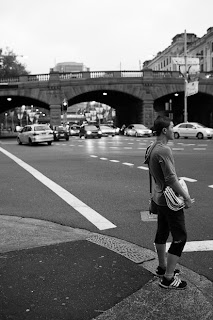 I need to just stop people and take their photo, I think. It would be better. I wish I'd walked a little bit further around to get him centred between the crosswalk lines. Looks like he's going somewhere in a rush. I worry that if I do stop people though, I'll get a whole series of photos of people flipping me the bird. Or looking confused. The Sartorialist, if you care to look him up, is pretty good at this. Problem is,  I don't think I've got quite the eye for fashion. I'd more likely stop someone because they were carrying a nice camera. 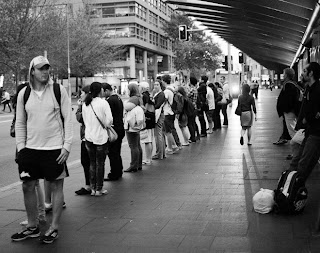 Very rarely, I'll see a line form at railway square for the bus. I think it's one of those things where if one person starts doing it, so too does everyone else. Usually it's all just a big mess. We're all just sheep in the  end. I wonder how many people it takes to form that tipping point though. Might be fun to do. I'd wander around the city with a few friends in tow, apparently unrelated, and start doing odd group things. Like looking at the sky. Or lining up to get into an empty restaurant. Genius! Wait, it's called a flash-mob, isn't it? 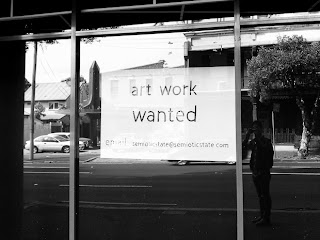 This is another gallery that is opening up around my place. There are a lot of galleries. None of them seem to do photos, and I'm not really into paintings. Call me uncultured. I just don't get it.

Seriously though, I live in one of the smallest suburbs in Sydney yet there's something like four galleries within walking distance, and those are only the ones I know about -- I'm sure there are more. It makes me wonder, who actually comes to these galleries? 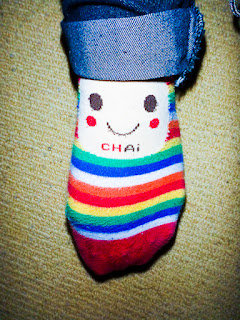 Playing footsies with my friend. I felt bad stomping on this face. Maybe I should start a sock-line. One that has messages on the bottom of them, but that no one knows is there except the wearer. You'd be walking around on that message all day. "Yeah, I'm a bad-ass!" Or maybe pictures of kittens for those that feel the need to step on kittens all day. You bastards. 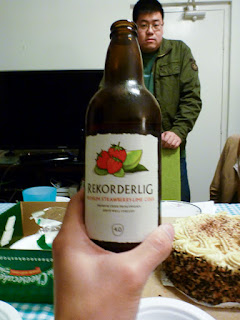 I like ciders. I'm a featherweight, you see. I used to think Strongbow was the ordinary fare, then I migrated to Monteiths, which was pretty nice. Along came Bulmers, which for some reason I can never remember the taste of, possibly because I keep drinking it, and now there's this... resk.. Reskorderlig..? I actually took the picture because I couldn't figure out how to spell the damn thing.

Cider that tastes like strawberries. Not unheard of, but this stuff tastes nice. Probably not something to drink with the boys. For that, I'll continue to stick to my fave -- Scotch and dry.

The unimpressed guy in the background? My old housemate back in my uni days. Deathly allergic to alcohol. I used to work in a bar and come back for a drink. Sort of like writing for a living and then coming home to blog... wait a second. 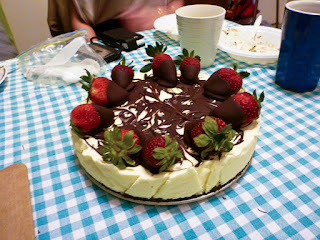 My mate's significant other decided to bake us a cake. Somehow my mate bought dessert cream rather than cream cheese. They both have the same damn label. I'm often amazed at the "survival" skills the modern man has. Why the hell do I know the difference between a spreadable and butter? Cafe-style raisin toast and regular? What's a duvet? Why does everyone know the name Tyler Durden?
Anyway, it was a cake that ended up like ice cream. I'm not even sure how that works.
Posted by M at 11:56 PM